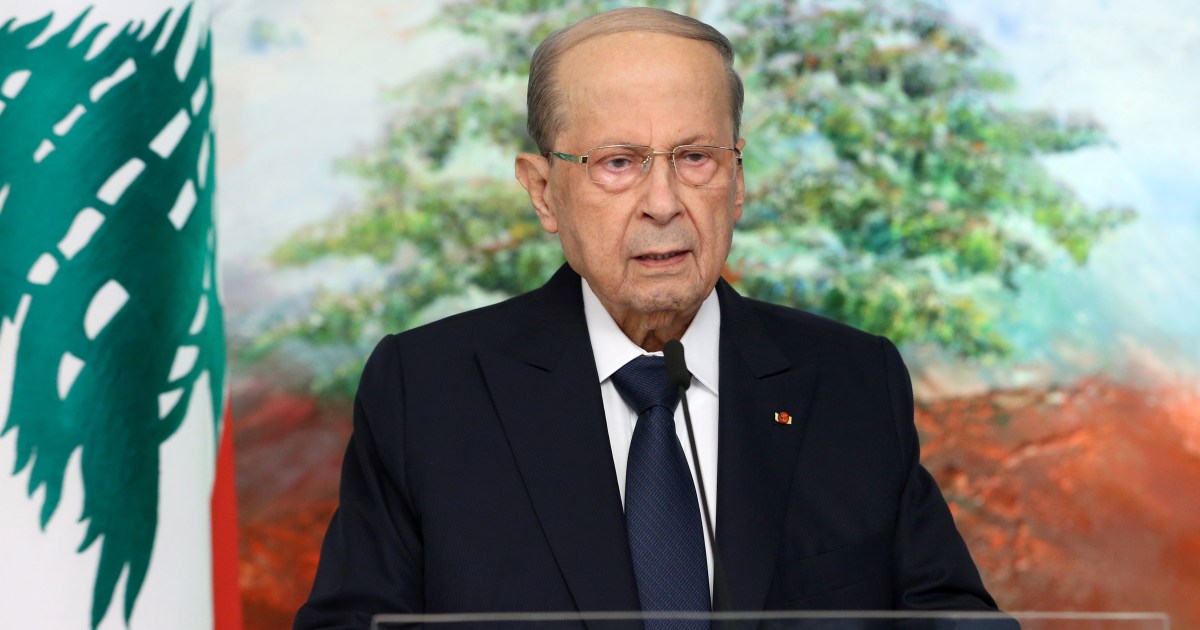 Michel Aoun calls for dialogue in an attempt to ease a diplomatic rift with the Gulf countries as the UAE becomes the latest to sever diplomatic ties.

Meanwhile, the United Arab Emirates (UAE) announced on Saturday it will withdraw its diplomats and called on its nationals not to visit Lebanon.

“The UAE announced the withdrawal of its diplomats from Lebanon in solidarity with the sisterly Kingdom of Saudi Arabia,” the foreign ministry said in a statement. It “also decided to prevent its citizens from travelling to Lebanon”.

In a tweet, President Aoun said Lebanon aspired to maintain good communication with Saudi Arabia and the rest of the Gulf states.

“We are keen to establish the best relations with the kingdom and strengthen them by signing bilateral agreements,” Aoun said on Saturday.

The comments followed a nearly three-hour meeting by a ministerial crisis management group, in which Education Minister Abbas Halabi said the government could not afford to resign over the diplomatic dispute.

“The country cannot be left without a government” because of other pressing matters, and will continue to work to resolve the rift, Halabi said.

The diplomatic crisis stemmed partly from a televised interview in which Lebanese Information Minister George Kordahi criticised the Saudi Arabia-led military intervention in Yemen, saying the Iran-aligned Houthis are “defending themselves … against an external aggression”.

Kordahi, who has the support of Iran-backed Hezbollah, said the interview had been recorded more than a month before he was appointed minister. He has so far declined to apologise or resign over the comments.

The comments have dealt the worst blow to Saudi-Lebanese relations since Saad al-Hariri’s 2017 detention in Riyadh. Saudi Arabia expelled Lebanon’s envoy and banned all Lebanese imports on Friday, and Bahrain and Kuwait followed suit, giving the top Lebanese diplomats 48 hours to exit.

Riyadh also issued a ban on all goods coming from Lebanon. In April, it had issued a separate ban on fruit and vegetable imports due to what it said was an increase in drug smuggling that Beirut was unable to halt.

Saudi Arabia’s foreign minister said on Saturday the latest crisis has its origins in a Lebanese political setup that reinforces the dominance of the Iran-backed Hezbollah armed group and continues to allow endemic instability.

“I think the issue is far broader than the current situation,” Prince Faisal bin Farhan Al Saud told Reuters in a phone interview. “I think it’s important that the government in Lebanon or the Lebanese establishment forges a path forward that frees Lebanon from the current political construct, which reinforces the dominance of Hezbollah.”

He said this setup “is weakening state institutions within Lebanon, in a way that makes Lebanon continue to process in a direction against the interests of the people of Lebanon.”

Qatar on Saturday dismissed Kordahi’s comments as “irresponsible,” according to a statement from the media office of the Qatari foreign ministry. It also called on the Lebanese government to take urgent measures to rebuild bridges between “brotherly nations”.

Oman expressed regret over worsening relations between some Arab countries and Lebanon, calling on all parties to exercise restraint and avoid escalation, the foreign ministry said in a statement on Saturday.

The row has spurred calls by some top politicians for Kordahi’s resignation, while others opposed such a move.

Kordahi stepping down would have knock-on effects that could threaten Prime Minister Najib Mikati’s coalition government, tasked with addressing a financial crisis the World Bank considers one of the worst in modern history.

His resignation could push ministers backed by Hezbollah and its Amal ally to follow suit at a time when the government is already paralysed by a dispute over an inquiry into the August 2020 port explosion.

The Arab League has expressed concern about a rapid deterioration of Lebanese-Gulf relations and appealed to Gulf countries “to reflect on the measures proposed to be taken … in order to avoid further negative effects on the collapsing Lebanese economy”.