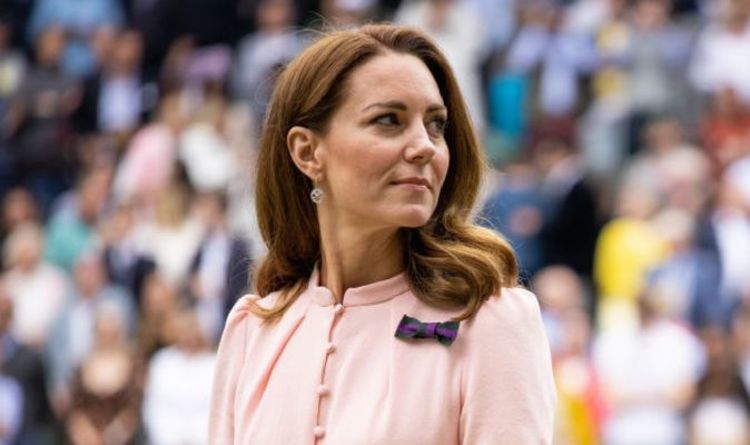 Speaking to US-based lifestyle magazine The List, Kinsey Schofield of ‘To Di For Daily’ launched a stinging rebuke at the producers of Harry & Meghan: Escaping the Palace for what she branded was an uncharacteristic portrayal of Kate, the Duchess of Cambridge and her achievements as a mother and Royal. The expert claimed the producers portrayed Kate, played by actress Laura Mitchell, as a character who “sits around getting her nails done” which Schofield said was frankly inaccurate.

The expert told The List: “Kate Middleton is sitting around getting her nails done when she receives an accusatory call from Meghan.

“What a joke! You know that Kate has three children climbing on her like a jungle gym at any given time!”

Ms Schofield went on to hammer how it was “so unfair” to paint her as a “snooty shallow” character in a raging tirade at the show’s producers given Kate’s role as mother and working Royal.

She explained how unlike this portrayal the Duchess of Cambridge does charitable work, has Royal duties, and is busy with her three children.

She stressed how the Duchess of Cambridge is a full-on working mother who, alongside royal work, also manages to drop as well as pick up her kids from school and run her own errands.

Schofield added the Duchess is “very hard-working and compassionate” before hammering “this is not a fair portrayal.”

But the backlash for Kate’s role is not the first time the film has come under fire for its portrayals as one particular scene saw fans of both the Sussex’s and Buckingham Palace united in fury.

In the opening scene of the film, a horrific moment depicts Meghan Markle lying injured amongst the wreckage of an overturned car during a nightmare dream sequence which Harry witnesses as he sleeps.

The bizarre scene shows Harry running up to the vehicle as he sees Meghan lying injured and fading quickly.

However fans lashed out at the “tacky and crass” scene which had many similarities to the tragic car crash that killed Prince William and Prince Harry’s mother Diana, Princess of Wales.

The scene was labelled “sick and offensive” as enraged viewers on both sides of the Royal rift could not believe what the film’s creators were thinking with the storyline.

The backlash comes as the film is the third in a trilogy of American made-for-TV films about Meghan and Harry’s departure from the Royal Family.

Murray Fraser and Parisa Fitz-Henley starred in the first film, while Charlie Field and Tiffany Smith took over the roles in the sequel.

In the third installment, Jordan Dean plays Prince Harry while Sydney Morton takes on the role of playing Meghan, the Duchess of Sussex

The film tracks the events leading up to the infamous tell-all Oprah Winfrey interview which aired in March 2021.

Harry and Meghan: Escaping the Palace is yet to have a UK release date.