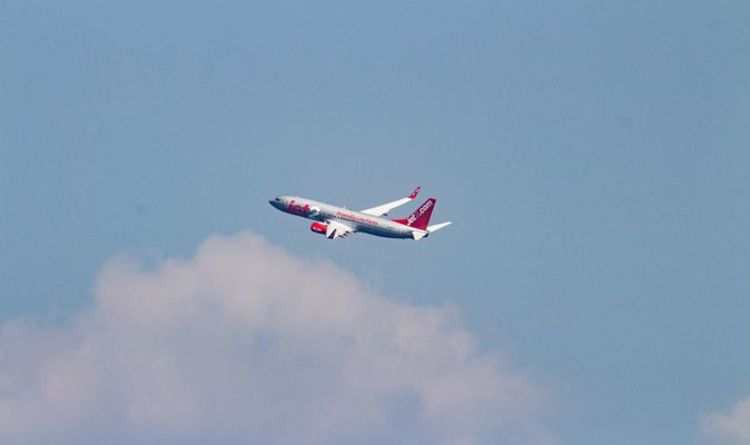 A Jet2 flight left Birmingham at 11.20am on Tuesday on time and was scheduled to arrive at Las Palmas in Gran Canaria at 3.30pm. Flight LS1259 was then and headed for Faro in Portugal. The reason for the diversion is currently unknown.

An emergency was first declared by LS1259 on its way to Las Palmas at around 12:51pm.

No reason was given for the division, which was first reported at 1:30pm BST by Twitter account @airlivenet.

The diverted Jet2 flight landed in Portugal at around 3:24pm BST.

In a statement provided to Express.co.uk, Jet2 said the flight followed “standard procedure” after a “minor fault indication”.

They said: “Flight LS1259 from Birmingham to Gran Canaria followed standard procedure and diverted to Faro this afternoon after the pilot reported a minor fault indication.

“The aircraft landed safely and customers will be transferred onto an alternative aircraft and continue on their way to Gran Canaria to enjoy their holidays.”

It comes after a volcano erupted on the island of La Palma on Sunday.

At around 3:35pm on Tuesday, the lava streaming from the Cumbre Vieja volcano is advancing at 0.7km per hour, according to estimations made by the Canary Islands Volcanological Institute (Involcan).

The group warned its route threatens further areas of the island including the towns of La Bombilla, Puerto Naos and El Remo.

A spokesperson for ferry operator Fred Olsen said on Monday some 360 tourists were evacuated following the eruption.

On Monday 20 September, local Canarian airline Binter said it had cancelled four flights to and from the neighbouring island of La Gomera, due to the eruption.

On Sunday, La Palma Airport in Santa Cruz was briefly closed due to the volcanic eruption.

The manager of air navigation in Spain, Enaire, had issued the recommendation as a preventive measure that no flights depart to the island of La Palma.