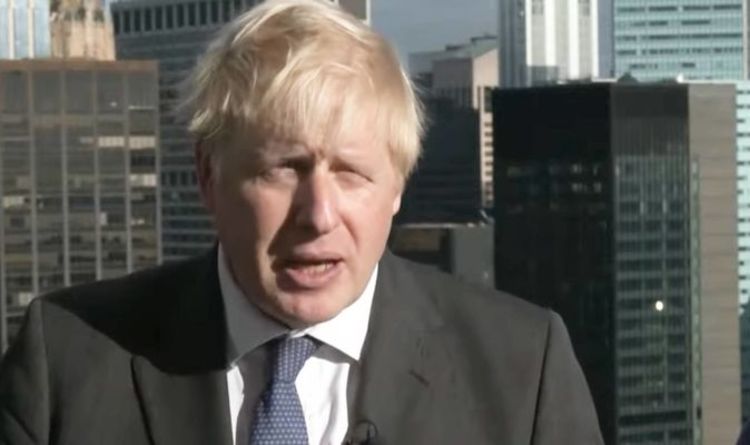 Boris Johnson spoke to GB News about the M25 protests which have brought motorways across the UK to a standstill over the past week. The climate change activists have been ramping up their efforts as they build notoriety with demonstrators charging into busy carriages on Tuesday morning in their fifth demonstration. Mr Johnson condemned the protesters, calling it “crazy” and hoped those responsible would be able to figure out on their own that what they are doing is the wrong thing.

On Sept 13, there were protests at junctions 20 for Kings Langley, Herts, 14 for Heathrow terminal four, three for Swanley in Kent, six for Godstone, Surrey and 31 for Lakeside, Essex.

But as their efforts gained media attention, the group have continued to protest with activists moving onto the busy carriages on Tuesday morning.

Protesters arrived at around 8am as police quickly attended the scene and prevented demonstrators from blocking the roads.

The protesters were cleared out in the space of a few minutes with the roads reopening shortly after that.

Speaking to GB News, Mr Johnson was asked by presenter Darren McCaffrey: “We look at what you’re doing on climate change.

“It’s happened for the fifth time in eight days and the police need to step up and stop this from happening. It’s ruining people’s livelihoods.”

A spokeswoman for climate groups told LBC last week: “We have tried reasonable protest, we know that the Government doesn’t listen to what the public says and it’s only by taking radical action, it seems, that we’re going to get some kind of radical response to a climate emergency.”

Insulate Britain has also written a letter to Highways England, in which the group state: “People’s safety during this campaign has always been our primary objective.

“Therefore, on the 16th September, we passed a request to the police to slow down the traffic on the southwest parts of the M25 network, as we were aware that supporters of the Insulate Britain campaign would be participating in acts of civil disobedience on that area.

“In the context of the horror of the climate crisis we believe that it is entirely proportionate to create disruption on the motorway network if it means the UK Government fulfils its legal obligation of staying below 2°C which will stop the unimaginable suffering for future generations.”