The cost of consumer goods in Israel rose by 2.8 percent over the course of 2021, data released by the Central Bureau of Statistics showed Friday, the highest rate in 13 years.

The figure for the annual consumer price index was calculated after the latest numbers from the month of December (0.3% increase) were factored in.

The CPI measures the average cost of household goods. Particular rises were seen in clothing and footwear (1.1%), home furnishings (0.7%) and food (0.5%).

Meanwhile, national housing prices continued their steep rise, with average prices for homes across the country growing by 10.6%.

The Finance Ministry has announced plans for legislative amendments in the coming months that will raise taxes on the purchase of a second home. The move is intended to moderate home purchases by real estate investors, thus increasing the supply of homes on the market and lowering prices. The government has also announced an ambitious housing plan for 2022-2025, aimed at the rapid construction of new homes to increase the supply of apartments. 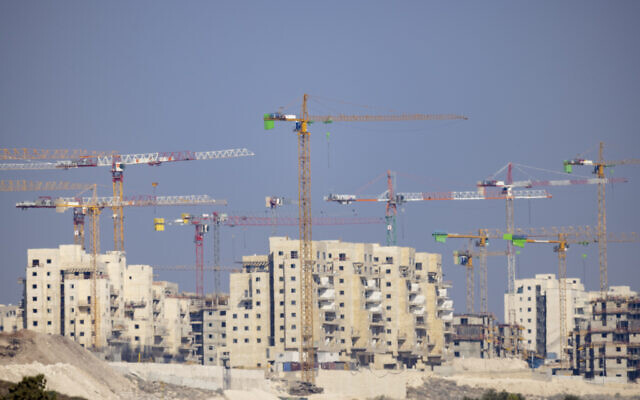 View of a construction site in the central Israeli town of Beit Shemesh on September 5, 2021. (Nati Shohat/Flash90)

Finance Minister Avigdor Liberman said last month that Israel’s skyrocketing housing prices would moderate by the end of 2022 and that he believes Israelis may even see prices drop in the coming years.

Outrage over the rising cost of living has been growing, a decade after Israel last saw widespread social unrest on the matter.

Food giant Osem, food importers and several popular restaurant chains have recently announced an increase in prices, citing rising costs of raw materials as well as taxation. The announcements have led to some calls for boycotts of brands that raise prices.

A December report by the Israeli aid organization Latet found that over 2.5 million Israelis currently live in poverty, among them more than 1.1 million children, and 932,000 households live in a state of economic distress.