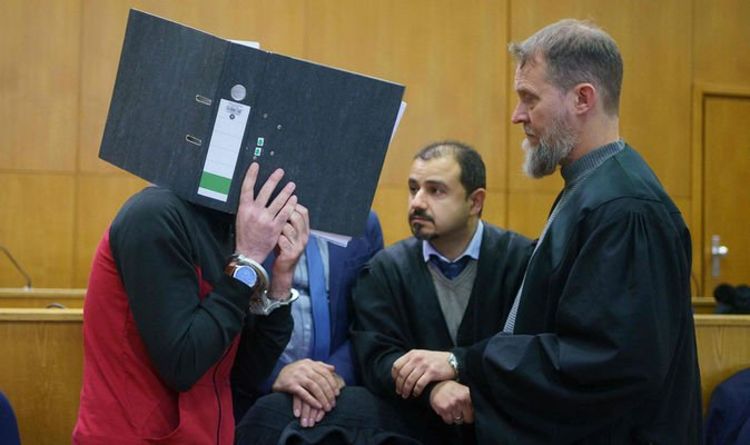 Militant Taha Al-Jumailly broke down after the verdict was read out. He became the first person to be convicted of genocide against the minority for the crime against a five-year-old Yazidi girl. Al-Jumailly, 29, was also found guilty of war crimes, aiding and abetting war crimes, crimes against humanity and bodily harm resulting in death.

In 2015, while living in ISIS-occupied Mosul, Al-Jumailly and his now-ex-wife purchased a Yazidi woman and child as slaves.

The Yazidis, a Kurdish-speaking group from northern Iraq, have been persecuted by ISIS extremists who have taken them as slaves or recruited them to fight.

Afterwards the fanatic and German national partner Jennifer Wenisch moved to Fallujah, where he carried out the punishment on the young girl.

A Frankfurt court heard he chained her to a window outdoors in 122F (50C) as punishment for wetting the bed. She later died of thirst.

Wenisch was sentenced last month to 10 years in prison.

Iraqi Al-Jumailly, who was arrested in Greece and extradited to Germany two years ago, had to face his victim’s mother in court after she testified at both trials.

After he was sentenced, lawyer Natia Navrouzov, hailed the move as a “historic” moment for the Yazidi community.

She said: “It is the first time in Yazidi history that a perpetrator stands in a court of law for genocide charges”.

She added that the trial sends a ‘clear message’ to ISIS militants, who Al-Jumailly joined in 2013.

Amal Clooney was also part of the team representing the girl and her mother, although she was not in court for the final day.

Last month, Islam convert Wenisch, 30, was sentenced to 10 years in prison by a Munich court for the war crime of letting the five-year-old Yazidi ‘slave’ girl die.

Wenisch converted to Islam in 2013, where she “allowed” her husband to carry out the crime and “did nothing to save the girl”.

The girl’s mother and fellow slave, identified only as Nora, testified at both trials despite Wenish’ lawyers trying to claim she was untrustworthy.

The team went as far as claiming there was no proof that the girl actually died.

Despite the caliphate being mainly in 2019, pockets of ISIS resistance still exist.

Earlier in November ISIS terrorists launched an attack on a Nigerian army base, causing civilians to ‘flee in terror’.

Footage shared on social media shows thick black smoke rising in the Askira area of Borno State after the jihadis launched their assault.

The area of Northern Nigeria has faced multiple raids from Islamist groups in recent years.