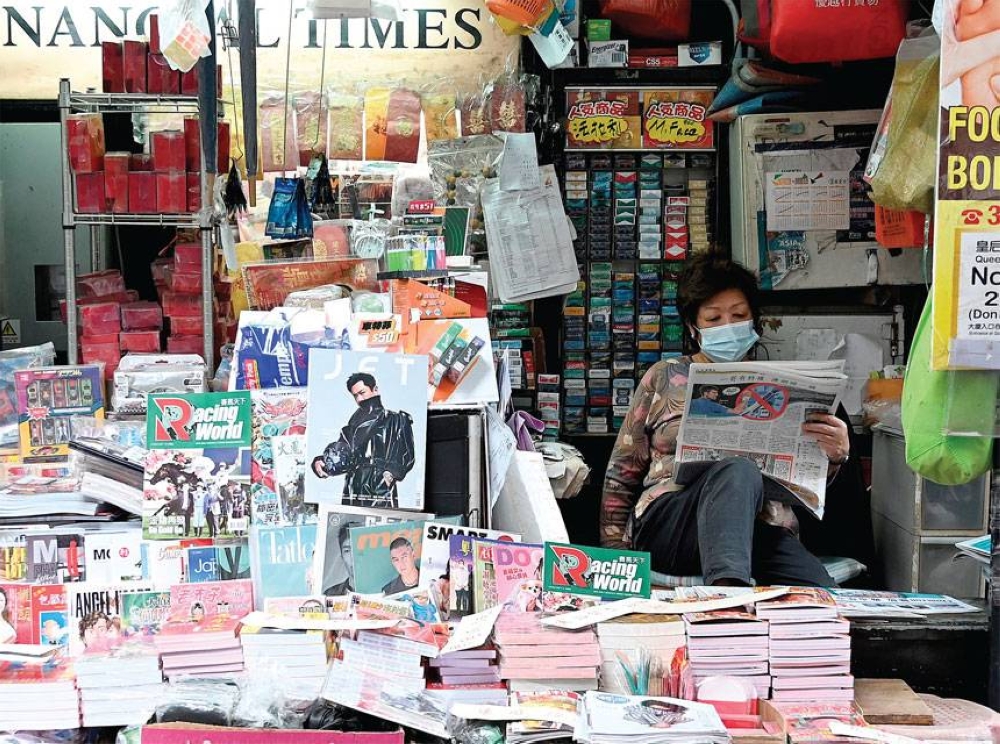 UNDER FIRE This photo taken on Jan. 6, 2022 shows a vendor reading a newspaper at a newsstand in Hong Kong. China’s crackdown on dissent has silenced or jailed most Hong Kong democracy activists and has now begun to focus on the press. AFP PHOTO

China’s crackdown on dissent has silenced or jailed most Hong Kong democracy activists and has now begun to focus on the press.

Chan knew he was a target as both the chair of the Hong Kong Journalists Association and an editor for the independent, crowdfunded online outlet Stand News.

“I was mentally prepared,” he told Agence France-Presse (AFP). “But…when they showed me the search warrant I was trembling.”

Chan used his phone to livestream his interaction with officers until they ordered him to stop. It was the last bit of reporting Stand News did.

The outlet shuttered later that day after authorities froze the company’s assets using a national security law and arrested seven of its staff for publishing “seditious” content.

Two of those employees have been charged and remanded into custody. Chan has no idea if he will be joining them.

“Are we next?” is something local news outlets — and increasingly international ones — are asking in a city that was once a regional bastion of media freedom in a tough neighborhood.

“Journalists are supposed to speak truth to power,” Lokman Tsui, a former journalism lecturer at the Chinese University of Hong Kong and now in the Netherlands, told AFP.

“And right now, truth is subversive in Hong Kong.”

Mainland China remains one of the most oppressive places in the world for journalists, with local media controlled by the state and foreign reporters heavily restricted.

But the business-friendly former British colony of Hong Kong thrived as a media hub, even after the 1997 handover.

The local press corps were renowned for their tenacity, writing headlines and scrutinizing officials in ways that were unimaginable in mainland China.

In 2000, a brazen question from a Hong Kong reporter to then-president Jiang Zemin famously sparked a tirade from the Chinese leader.

The phrase “run faster” became a badge of honor among reporters.

But the signs of demise were always there with Hong Kong’s media landscape becoming consistently less free.

When Reporters Without Borders published their first annual press freedom table in 2002, Hong Kong was ranked 18th. Last year it was 80th.

And the last seven months have seen unprecedented changes.

First to fall was Apple Daily, a pugnacious and popular tabloid that embraced the city’s 2019 democracy protests and was openly loathed by China’s leadership.

Stand News was next and a week after that Citizen News, a similar online outlet founded by veteran reporters, also closed saying they “no longer feel safe to work.”

“Press freedom has been diminishing over a number of years, but since 2020 especially that has been turbocharged,” Yuen Chan, a veteran Hong Kong journalist who now teaches at London’s City University, told AFP.

After Stand and Citizen news shuttered, she said Western nations had national security laws that were “far more draconian.” But she gave no examples of where such laws had ever been deployed against the press.

One former editor at the independent news website InMedia said there was an “unprecedented climate of fear in the industry.”

So far the international media have not been targeted with the national security law, but Hong Kong’s government has grown increasingly critical of coverage it dislikes.

Many major outlets still have Asia headquarters in Hong Kong including AFP, Bloomberg, the Wall Street Journal, CNN, the Economist and the Financial Times.

Since November, Hong Kong officials have published 13 letters to foreign media outlets, including in English, French, Spanish and Dutch, mostly over editorials the government dislikes.

Letters to the Wall Street Journal and Britain’s Sunday Times have warned that coverage may have broken Hong Kong’s laws.

In November, Hong Kong also refused to renew the visa of an Australian correspondent from the Economist, the fourth foreign journalist to be forced out by visa denials since 2018.

Stand News’ Chan said he hoped foreign correspondents will stay and continue observing developments in Hong Kong, but warned them not to underestimate how far authorities will go.

“People used to think that Apple Daily would never close, it had 25 years of history and more than a thousand employees,” he said. “But it closed down all the same.”