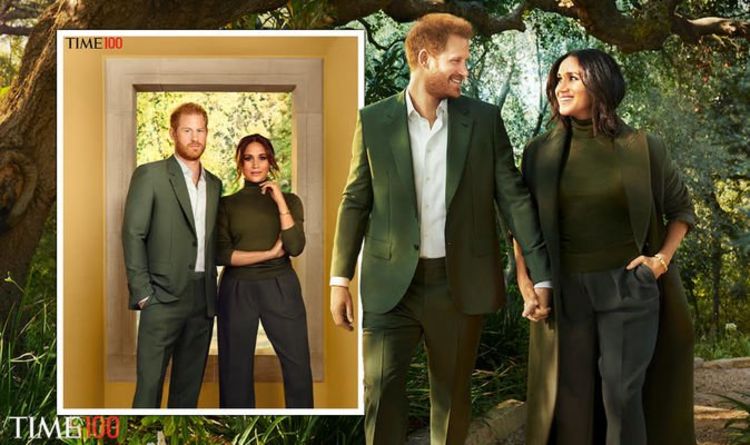 Harry and Meghan said they were “humbled” to be included on the prestigious list. Time 100 celebrates those the magazine deems the most influential people on the planet, covering a range of fields.

Short write-ups are included for each winner, usually by another high-profile figure.

The Sussexes wrote the listing for Dr Ngozi Okonjo-Iweala, director-general of the WTO.

Meghan and Harry’s was penned by Jose Andres, founder of the World Central Kitchen – an organisation the couple have worked with.

“They don’t just opine. They run toward the struggle.”

After news of their inclusion was announced, a statement was released on behalf of the Sussexes.

It read: “Prince Harry and Meghan, The Duke and Duchess of Sussex, are not only humbled to be part of this years’ TIME 100 through the words of friend and partner José Andres, but to also write in praise of Dr. Ngozi Okonjo-Iweala for the publication’s annual list of Most Influential People.”

Harry and Meghan stepped back from their position as senior working members of the Royal Family in March 2020 and moved to California.

“They turn compassion into boots on the ground through their Archewell Foundation.

“They give voice to the voiceless through media production.

“Hand in hand with nonprofit partners, they take risks to help communities in need – offering mental-health support to Black women and girls in the US and feeding those affected by natural disasters in India and the Caribbean.”

The Sussexes have signed major deals to produce content for Netflix and Spotify, two of the biggest media companies in the world.

Earlier this year, Meghan’s children’s book, ‘The Bench’, was published.

Harry and Meghan wrote a short piece for Time Magazine praising Dr Okonjo-Iweala, the first African WTO head, who also made the list.

Describing her fight against coronavirus, they wrote: “As we face a constant barrage of vaccine misinformation, bureaucratic slowdowns across both government and industry, and the rise of variants that underscore the urgency of the situation, Okonjo-Iweala has shown us that to end the pandemic, we must work together to equip every nation with equitable vaccine access.

“Our conversations with her have been as informative as they are energizing.

“This is partly because, despite the challenges, she knows how to get things done—even between those who don’t always agree—and does so with grace and a smile that warms the coldest of rooms.

“Achieving vaccine equity is a global duty of compassion for one another. Our hope is that guided by strong leaders like Ngozi, we can get there soon.”