ROME, Italy (AFP) — The G20 major economies committed on Sunday to the key goal of limiting global warming to 1.5 degrees Celsius, but disappointed leaders warned that more was needed to make a success of UN climate talks, beginning in Glasgow.

British Prime Minister Boris Johnson, the host of the COP26 summit that opened on Sunday, said the pledge from world leaders after two days of talks in Rome was “not enough,” and warned of the dire consequences for the planet.

“If Glasgow fails, the whole thing fails,” he told reporters, saying the G20 commitments were “drops in a rapidly warming ocean.”

UN Secretary-General Antonio Guterres also expressed disappointment at the outcome of the G20 summit, saying he left Rome “with my hopes unfulfilled — but at least they are not buried.”

The G20 nations between them emit nearly 80 percent of carbon emissions, and a firm commitment on action was viewed as vital for the success of the UN’s COP26.

In a final communique, the G20 reaffirmed its support for the goals in the landmark 2015 Paris climate accords, to keep “the global average temperature increase well below 2 degrees and to pursue efforts to limit it to 1.5 degrees above pre-industrial levels.”

They said this would require “meaningful and effective actions and commitment by all countries, taking into account different approaches,” while they also promised action on coal. 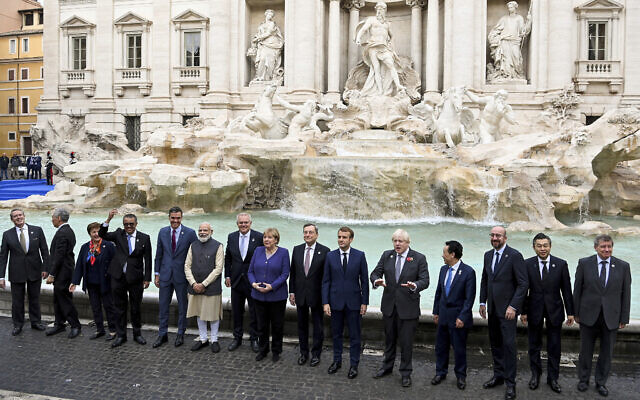 Leaders of the G20 pose for a photo by the Trevi Fountain, during an event for the G20 summit in Rome, October 31, 2021, laying the groundwork for the climate conference opening the same day in Glasgow. (Jeff J Mitchell/Pool Photo via AP)

But experts say meeting the 1.5-degree target means slashing global emissions nearly in half by 2030 and to “net-zero” by 2050 — and the G20 set no firm date, speaking only of reaching the goal of net-zero “by or around mid-century.”

Italian Prime Minister Mario Draghi, who hosted the G20 talks, said he was “proud of these results, but we must remember that it’s only the start.”

Eyes now turn to Glasgow, where more than 120 heads of state and government, including US President Joe Biden, India’s Narendra Modi, and Australia’s Scott Morrison, who were heading there from Rome.

The G20 leaders did agree to end funding for new unabated coal plants abroad — those whose emissions have not gone through any filtering process — by the end of 2021.

“If the G20 was a dress rehearsal for COP26, then world leaders fluffed their lines,” said Executive Director Jennifer Morgan. 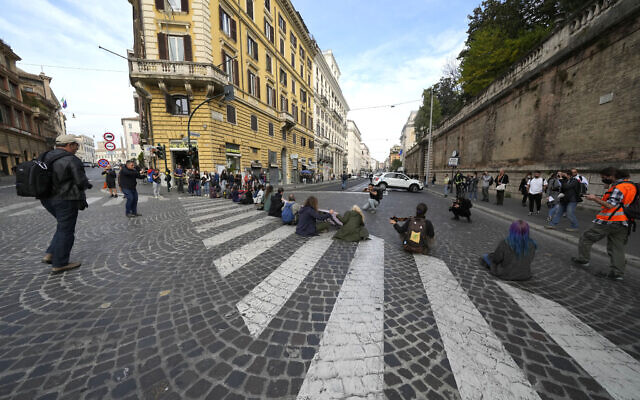 Activists from Extinction Rebellion block a road during a demonstration outside the G20 summit in Rome, October 31, 2021. (Luca Bruno/AP)

European leaders pointed out that given the fundamental divisions among the world’s most advanced nations, a joint commitment to what was the most ambitious Paris goal was a step forward.

“I hear all the very alarmed talk on these subjects. I’m myself worried and we are fully mobilized,” said French President Emmanuel Macron.

“But I would like us to take a step back and look at the situation where we were four years ago,” when former US president Donald Trump announced he was pulling out of the treaty.

Draghi said that the needle had moved markedly even in the past few days, including by China — by far the world’s biggest carbon polluter.

Beijing plans to make its economy carbon neutral before 2060, but has resisted pressure to offer nearer-term goals.

India, meanwhile, argues that if net-zero by 2050 is the global goal, then rich countries should be carbon neutral 10 years earlier, to allow poorer, emerging nations a larger carbon allowance and more time to develop. 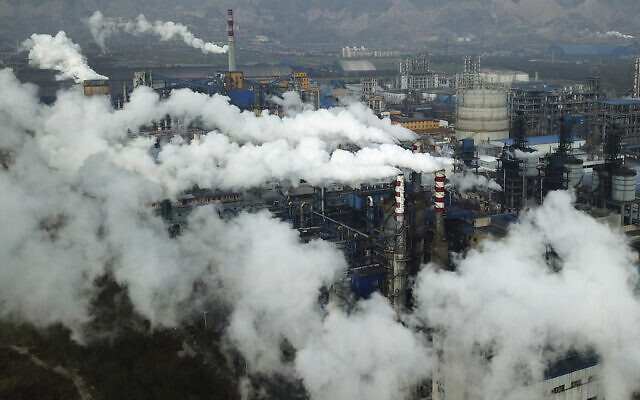 Earlier on Sunday, Draghi, Britain’s Prince Charles, and Pope Francis had all called on G20 leaders — and by extension, the wider group of world leaders meeting in Glasgow — to think big.

Calling climate change “the defining challenge of our times,” Draghi warned: “Either we act now… or we delay acting, pay a much higher price later, and risk failing.”

Pope Francis, who is outspoken on the issue and received several G20 leaders at the Vatican this weekend, said: “This is a moment to dream big, to rethink our priorities… The time to act, and to act together, is now!”