Skip to content
HomeNews‘F***ing scumbags!’ M25 protests cause chaos as woman blocked from daughter in labour 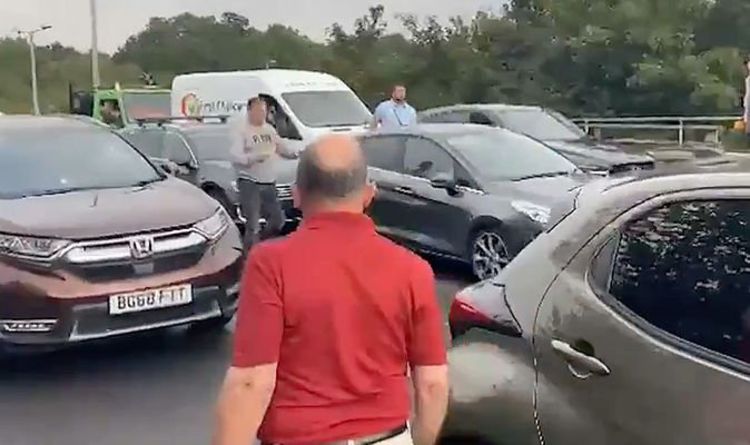 Footage shows around a dozen Insulate Britain activists have once again blocked the M25 during rush hour on Wednesday following another two-hour demonstration earlier this week. Police arrested almost 80 people involved in the protest on Monday with Insulate Britain representatives furiously defending their climate change protest on television stations the following day. Now, the group has taken to the streets once again with a video showing drivers calling them “f***ing scumbags”, telling them they will lose their jobs and one woman disrupted by the traffic as she tries to help her in-labour daughter.

M25 protesters blocked a junction on the M25 for a few hours to bring attention to climate change issues on Monday.

The protesters split the public with some furious ordinary people were being punished for their protest with others praising their work to bring climate change issues to the forefront of conversations.

Sky News reports 78 people were arrested after the protesters sat in the middle of the road during rush hour.

Police were notified at around 8:15am with the roads then cleared two hours later.

The group behind it, Insulate Britain, appear to have blocked the motorway yet again to bring attention to their demands.

Speaking on LBC, Ms Venables explained police were able to move some cars away from the blocked stretch of road.

But some of the roads are still completely blocked off with Ms Venables telling the radio station one woman’s daughter has gone into labour.

She explained she was driving through to pick up her grandchild so the daughter can go to the hospital but has been caught up in the traffic.