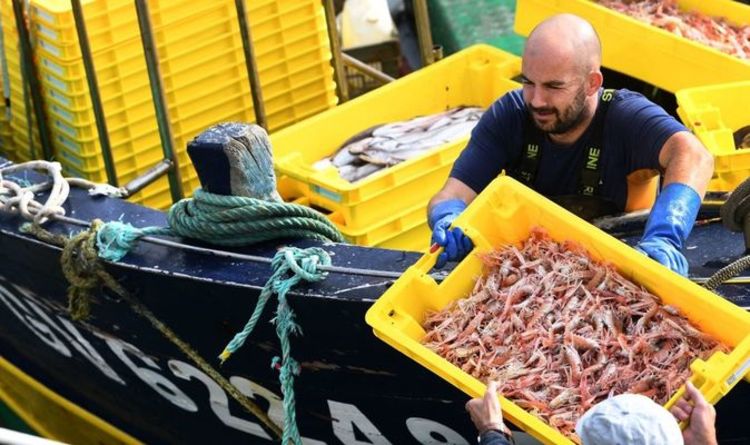 Debate among readers follows an EU order for the UK and France to resolve their differences over fishing rights by December 10. Talks to resolve tensions between the neighbouring nations are ongoing since the UK officially left the EU at the start of the year.

A Government spokesperson said: “We have licensed nearly 1,700 EU vessels overall; our approach to licensing has been reasonable and fully in line with our commitments in the Trade and Cooperation Agreement.”

Yet furious Britons have taken offence to the EU order, suggesting it is one of their “pathetic threats”.

Commenter Bigboy16 said: “It gives me a big laugh when I see these pathetic threats from the EU.”

Suggesting more should be done, Jethro51 said: “We should have taken back our waters from EU domination, lock stock and barrel. An immediate ban on all foreign fishing vessels from Jan 2021.”

Mocking the French in the process, Allanr said: “So little Napoleon is not happy, what’s he going to do throw the rest of his toys out of the pram?”

One reader pushed the debate further by suggesting France needs to resolve more than just a maritime problem.

Dai Agram said: “Quidproquo……. Give them 48 hrs to stop the dingies etc in return. [sic]”

UKPatriot asked exactly what the EU could do about the situation.

He said: “Or else what? Sometimes I am baffled by the EU’s threat on the fishing row, they’re our waters what is the EU going to do? Refuse to fish there anymore.”

John Longstride said: “France has repeatedly complained that the UK and Jersey were not granting as many licenses as French fishermen were applying for.”

He added: “Obviously the French have not grasped the idea that this is a part of why people voted to leave the EU. Things are only going to get worse for EU fishermen as the UK takes back control of our waters and they are granted less and fewer licences.”

Many commenters realised the French President was turning the situation into a political game – for his own benefit.

Raylynup said: “Macron just flexing his puny muscles to look effective amongst the French voters. He’s not popular and needs to get voters back on side. Boris and the Government need to stand up to this petulant man.”

Adding a twist of humour to the debate, one commenter added that even the fish have had enough.

Cristina11 said: “Even the fish are fed up, that’s why they’ve swam to British waters so they can pull the finger on France.” [sic]

Summing up the argument, Doug627586 said: “This is just more evidence that we absolutely made the right choice when we left the EU.”

He concluded by saying: “Who wants to be a part of a bullying dictatorship who are not happy to play the game, unless it’s played by their rules, however biased they might be.”