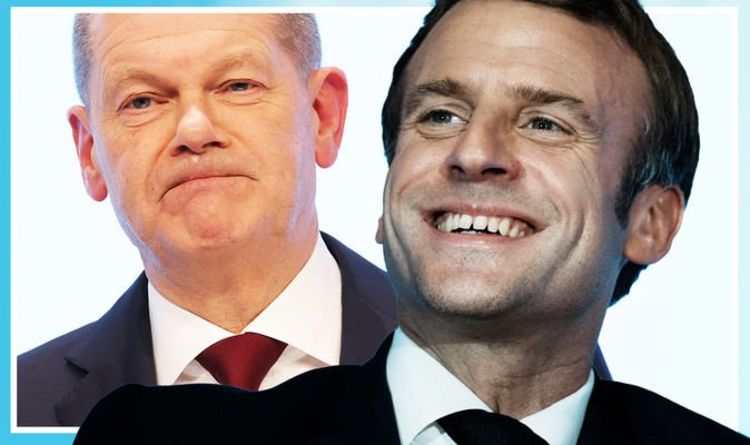 According to experts from the Europe Centre, the Franco-German relationship, which is “at the heart of European union policy”, should come away bolstered by the handover. Mr Scholz will take over as German chancellor after his party signed a deal with the Greens and the Free Democrats, nearly two months after the social democrats won federal elections in September.

Speaking to the Atlantic Council, Jörn Fleck, Deputy Director of the Europe Center argued that Paris should get on well with an SDP chancellor and a foreign office led by the Greens.

He added: “French President Emmanuel Macron’s team will note references throughout the agreement to a more sovereign and more capable European Union.”

Mr Fleck also said that Germany can be expected to take a more vocal approach to EU rule-of-law challenges, bad news for Poland and Hungary which have tested the bounds of EU laws.

According to the European expert, the coalition agreement is clear in its support for stricter enforcement of EU policies around rule of law.

This comes after Poland made a series of legal changes relating to the appointment, discipline and removal of Polish judges, which effectively decouples Poland’s legal system from other member states.

Mr Fleck said: “Warsaw and Budapest might not yet be all too worried amid complex EU decision-making processes and dynamics in this area.

“But they should prepare for a change in tone and tack from Berlin.”

However, Mr Fleck warned that a “great leap forward for German policy” should not be expected.

READ MORE: Netherlands, Sweden and Denmark will be unhappy as Merkel replaced

“You have accepted this energy, perhaps sometimes this insolence, with a great deal of benevolence and wisdom and from this I have learned.

“We have together shaken up many things and done a lot for Europe, before the crisis and after the crisis.

“Since you became Chancellor, France has come to know you and love you.”

He added: “During all these years, you have contributed to keeping Europe united.”

Despite standing as a candidate for the rival Social Democratic Party (SPD), the former mayor of Hamburg promised voters continuity after 16 years under the conservative Mrs Merkel.