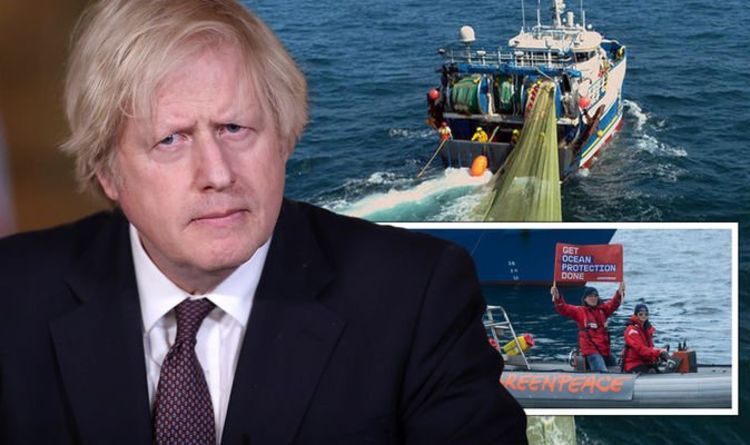 And Greenpeace campaigners have called on Prime Minister Boris Johnson to live up to his Government’s pledge to be a “world leader” when it comes to marine protection in the wake of their shocking research. Greenpeace’s investigation revealed vessels which are licensed for industrial fly-shooting, a high intensity fishing method which disturbs the seabed, spent the equivalent of almost four years operating in UK waters last year.

In total 75 industrial fishing vessels – 60 of which are EU-flagged – were licensed to fly-shoot in UK waters without a full environmental or economic impact assessment of this fishing method by the UK Government.

Greenpeace will next week be joined by fishermen as they sail up the Thames to the House of Parliament in protest against the government’s failure to safeguard our oceans and fishing communities.

Industrial fly-shooting is estimated to be up to 11 times more efficient than traditional inshore trawling and involves dragging heavy weighted gear along the seabed.

Greenpeace last week declared a state of emergency in the English Channel and Southern North Sea, where the new fly-shooter fleet has concentrated its operations.

Mr Thorne added: “Our government loves to praise itself as a world leader on marine protection, and has admirably backed calls to protect 30 percent of the world’s oceans by 2030. However, closer to home, almost anything goes in UK waters.

“We stand in solidarity with fishers whose livelihoods are at risk because of our government’s inability to protect our waters from industrial fishing.

“Next week, together with fishers, we will be sailing to parliament to make clear that enough is enough.

“Our oceans and our fishing communities need urgent protection.”

During her trip she witnessed Larche, a French-flagged fly-shooter, operating in the Bassurelle Sandbank protected area.

Ms Lucas held a banner reading “This is a marine protected area” in front of Larche, which after radio contact with Greenpeace activists hauled its gear and left the protected area.”