Skip to content
HomeNews‘EU bullies will never give us a fair deal!’ Calls for Frost to trigger Article 16 NOW 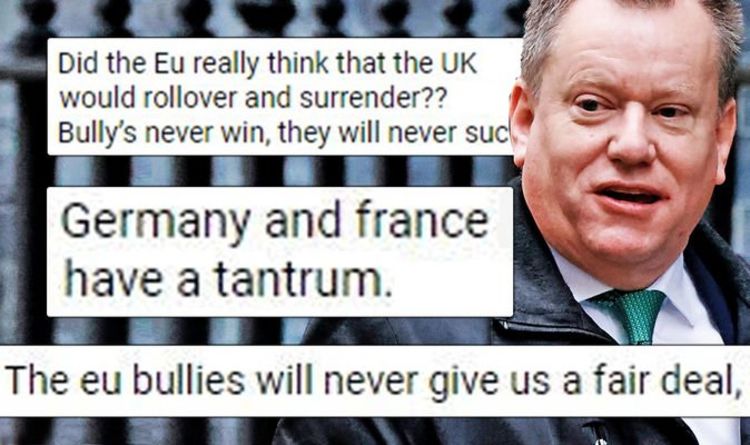 Lord Frost on Monday threatened to unilaterally suspend the Northern Ireland Protocol as he called for a “real negotiation” with the EU. The UK is pushing for changes to the protocol, which was agreed to prevent a hard border between Northern Ireland and the Republic of Ireland after Brexit but has caused issues for trade across the Irish Sea.

Ambassadors to the UK from France and Germany criticised the Brexit minister’s threat.

Commenting on this website, user d0nmac wrote: “The EU bullies will never give us a fair deal, trigger Article 16 now.”

Another reader, username Dogman, said: “Germany and France have a tantrum. Now invoke Article 16. Let’s be done with it. Too much shadow-boxing.”

A third, username Smell the Flowers, added: “Did the EU really think that the UK would rollover and surrender?

“Bullies never win, they will never succeed in breaking up the UK, which is their goal.”

On Monday, Lord Frost said there was “ample justification” for the UK triggering Article 16.

He told the Lords: “They would be making a significant mistake if they thought that we were not ready to use the Article 16 safeguards, if that were to be the only apparent way forward to deal with the situation in front of us.

“If we are to avoid Article 16, there must be a real negotiation between us and the EU.”

In response, Andreas Michaelis, Germany’s ambassador to the UK, said: “Seems we are entering a new phase with regard to the Northern Ireland Protocol.

“Just as the EU becomes more pragmatic and understanding the UK adopts a less flexible line. Call that joint implementation.”

Catherine Colonna, France’s ambassador to the UK, said: “‘The reason the UK is so belligerent is precisely because the EU is so accommodating’ is an opinion we hear more and more here. Troubling.”