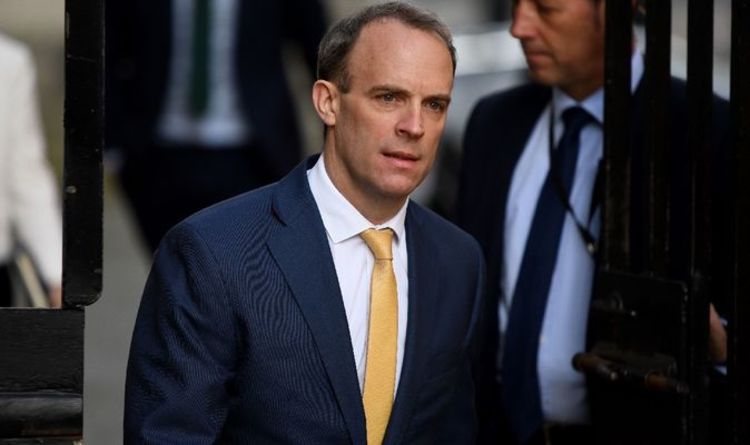 France 24 contributor Armen Georgian has argued Dominic Raab failings over Afghanistan have been the cause of the fall from grace in Boris Johnson’s cabinet reshuffle. Mr Raab was axed as Foreign Secretary on Wednesday and was moved to the Ministry of Justice amid a shuffling of the Prime Minister’s top team. Mr Georgian claims Mr Raab is now “paying the price” for failing to show leadership amid the Taliban takeover of Kabul.

Mr Georgian told France24: “It is still a demotion, I mean Foreign Secretary is really one of the big prestigious jobs in any government and to lose that is a demotion.

“It’s true that yes he does retain the deputy, he is given this job of deputy prime minister perhaps in recognition of his loyalty to Boris Johnson and the face he stood in for Boris Johnson when Johnson was very ill with Covid last year.

“But it seems to be that he’s probably paying the price for his performance in the Afghanistan disaster.

“He was absolutely ripped apart by Keir Starmer, the leader of the opposition in Prime Minister’s Questions.”

“He faced criticism from former army officers and so forth about why he was not showing more leadership in the crisis response,” added  Mr Georgian.

“Particularly the day Kabul fell when he was out of the country.”

He will now take up a position as Justice Secretary and has been appointed Deputy Prime Minister during a cabinet reshuffle.

Mr Raab has been replaced by International Trade Secretary Liz Truss. Ms Truss was confirmed as the new Foreign Secretary this afternoon.

“I shouted ‘Are you happy with demotion?’

“He looked at me, winked, and walked on.

“All the time he was smiling and then just as he got out of the view of the cameras he suddenly dropped his smile.”