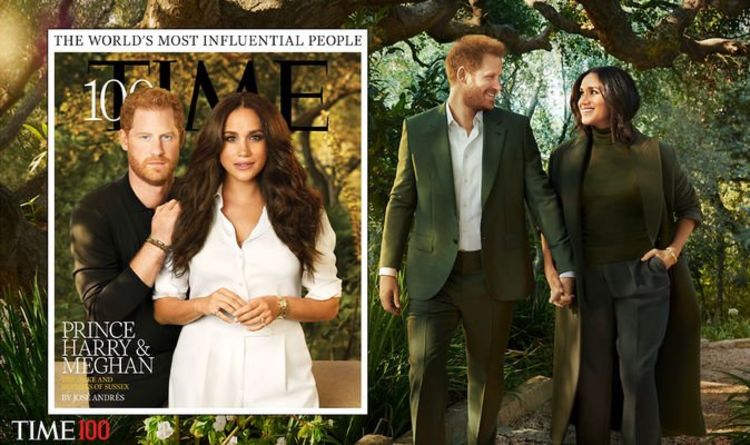 The Duke and Duchess were included in Time Magazine’s list of “100 most influential people of 2021”. And royal commentator Richard Fitzwilliams suggests Meghan is in a prime position to launch a political career.

“My congratulations to them for making the cover of Time.

“It’s a considerable feat. It shows the power of their brand.

“It indicates a political future for Meghan. I hope they use this success wisely.”

The Sussexes’ stepped back from their roles as senior working members of the Royal Family in March 2020.

Harry and Meghan featured on the cover of the Time Magazine edition featuring its “100 most influential people of 2021 list”.

Meghan, decked out in an all-white outfit, is pictured in front of Harry who is wearing a smart brown shirt.

“They give voice to the voiceless through media production.”

Mr Fitzwilliams isn’t the first royal commentator to suggest Meghan could launch a political career in the US, where fame can be a stepping stone to political office.

Writing for The Sun, biographer Tom Bower suggested the Duchess could run for office in California, then seek the Democrat presidential nomination.

He wrote: “Once Harry has finished promoting his books, will Meghan launch her own global campaign to engage in the swirling muck of American politics?

“She could also run for the state’s governorship, one of ­America’s most prestigious offices.

“At the end of 10 years, the prime of a politician’s life, her record could well justify a bid for the Democrat nomination for the presidency.

“With the support of Democrat godfathers, the Clintons and the Obamas, Meghan should have little difficulty getting ­nominated as one of the state’s 40 Congressmen sent to Washington.”

On Tuesday, Gavin Newsom, the governor of California, survived a recall bid with a clear majority.

Speaking in Sacramento he said: “I’m humbled and grateful to the millions and millions of Californians that exercised their fundamental right to vote.”