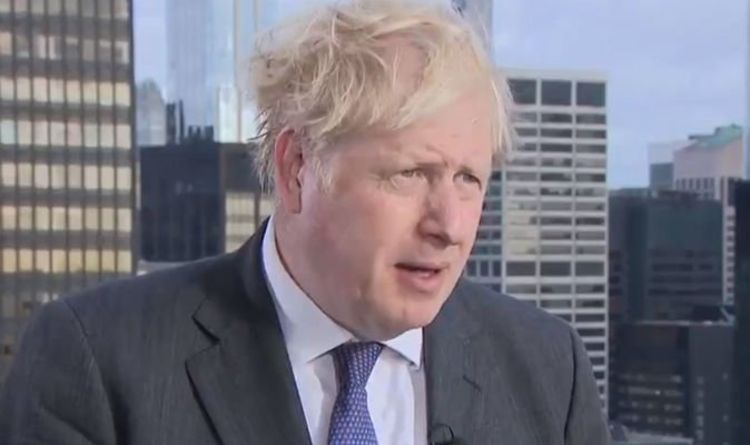 Beth Rigby interrogated Boris Johnson during a press junket and demanded to know whether the Prime Minister could guarantee a free trade deal with the US before 2024. Mr Johnson squirmed as he attempted to divert from the question by stating the UK has already established many trade deals post-Brexit despite Ms Rigby branding the UK as “small fry” to the US. The Sky News journalist attacked Mr Johnson’s Brexit record with the annoyed Conservative leader telling her she was “wrong” with her “gloom” but still refused to guarantee a free trade deal by 2024, nearly five years after the UK left the EU.

Ms Rigby spoke to Mr Johnson during his visit to New York and demanded answers about the US trade deal.

She told the prime minister: “The US/UK was a great Brexit win and now it is on the back burner.

“You said President Biden has many fish to fry, global Britain to you then is small fry to the US?”

An exasperated Mr Johnson replied: “Come on Beth, you were on the first trip two years ago where the Americans wouldn’t even buy British beef.

“We’ve lifted that up and one of our most significant exports is scotch whisky, we’ve lifted tariffs [on those]”.

Ms Rigby interjected and said the UK was promised to be the “first in the queue” for a trade deal but now Mr Johnson could not say the UK will have a trade deal.

Mr Johnson added: “You’re entitled to your gloom, but you are wrong!

“What you are seeing is a massive improvement in intriguing relations.”

The pair continued to clash as Ms Rigby repeatedly asked whether Mr Johnson could guarantee a trade deal despite his previous promises throughout the Brexit period.

Mr Johnson brought up the Australian trade deal which Ms Rigby then pointed out was only 10 percent of what a potential US trade deal could make.

The PM was saved by the bell as reporters at the junket appeared to get angry and were urging Ms Rigby to move on to let them speak.

He concluded without guaranteeing the deal before 2024 but said: “We’re going to go as fast as we can.”