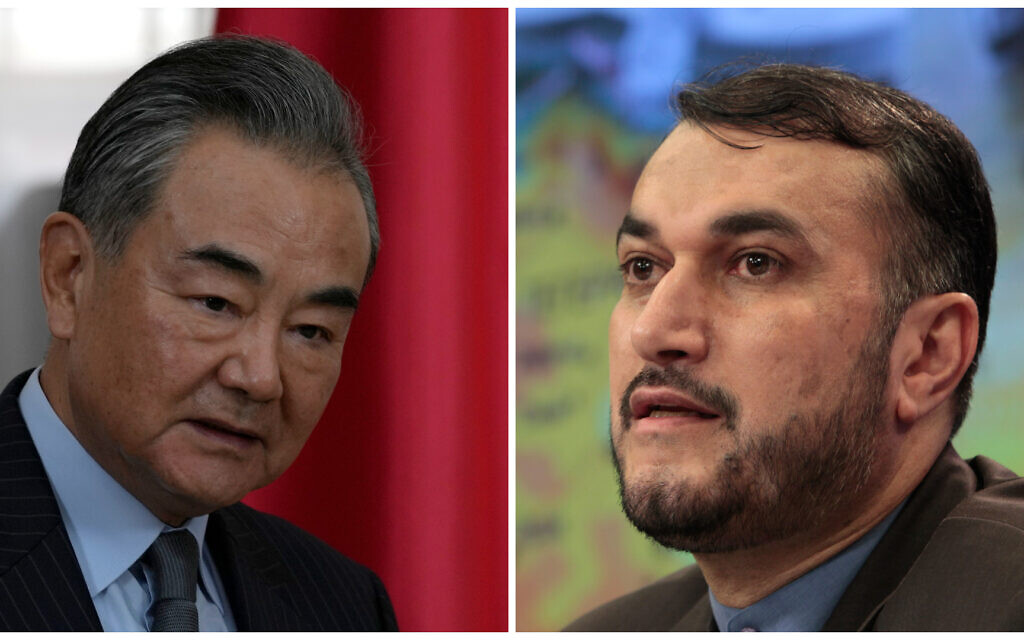 BEIJING — China said Saturday it would begin implementing a strategic agreement with Iran, strengthening economic and political cooperation between the two countries as Beijing blasted Washington’s sanctions on Tehran.

China and Iran signed the agreement last year after years of talks, with the wide-ranging partnership set to span areas including energy, security, infrastructure, and communications.

Chinese foreign minister Wang Yi and Iranian counterpart Hossein Amir-Abdollahian announced the start of the partnership’s implementation at a meeting in east China’s Wuxi on Friday, Beijing’s foreign ministry said in a statement.

Few details of the secretive deal have been published, but The New York Times reported in 2020 that it would secure a regular supply of oil for China, citing a draft of the agreement leaked to the paper.

China is Iran’s leading trade partner and was one of the biggest buyers of the country’s oil before then-United States president Donald Trump reimposed sweeping unilateral sanctions in 2018.

China has officially stopped importing oil from Iran, but analysts say Iranian crude is continuing to enter the country disguised as imports from other countries.

Beijing has long sought to boost ties with Tehran, with Chinese President Xi Jinping describing Iran as “China’s major partner in the Middle East” on a rare visit to the country in 2016.

Wang and Amir-Abdollahian’s meeting comes as talks continue in Vienna over a potential deal to halt Tehran’s development of nuclear weapons.

A 2015 deal — agreed to by Iran, the US, China, Russia, Britain, France, and Germany — offered Tehran sanctions relief in exchange for curbs on its nuclear program.

But the US withdrew from the agreement in 2018, reimposing biting sanctions and prompting Tehran to begin rolling back on its commitments.

Talk to salvage the nuclear deal began in late November, after being suspended when Iran elected a new ultra-conservative government in June.

Wang told his Iranian counterpart on Friday that China believes the US is to blame for the current state of the deal, the foreign ministry said in its statement.