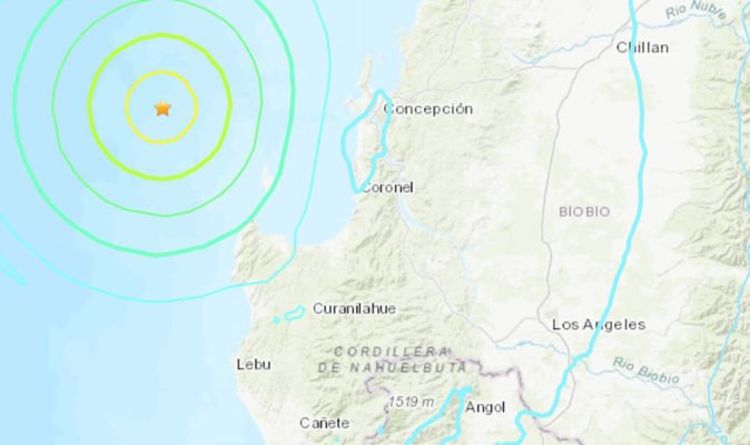 The quake struck offshore Bio-Bio and 158.88km northwest of Lebu, the European Mediterranean Seismological Centre (EMSC) has confirmed. Its epicentre was near Concepcion, Provincia de Concepción, Region del Biobio in Chile. The EMSC added it was at a depth of 2km. Shallow earthquakes are more often felt more strongly than deeper ones as they are closer to the surface.

Chile was shaken near Concepcion, Provincia de Concepción, Region del Biobio, by an earthquake of magnitude 6.2 only 16 minutes ago, the German Research Centre for Geosciences (GFZ) reported.

It added based on initial seismic data, the quake will likely have been widely felt by almost everyone in the area of the epicentre.

The quake may also have caused “light to moderate damage”.

Several locals have taken to Twitter to describe the impact from the eartquake.

Maria Teresa Toledo Knothe, using the handle @maria_konthe, wrote: “I live on the coast of Biobio. Strong and long.

“The replicas are already being felt.”

The earthquake struck at a shallow depth of 11km beneath the epicentre on Monday morning at 8:58am local time.

A second report was later issued by the United States Geological Survey, which also listed the quake as magnitude 4.4.

Towns or cities which likely felt tremors included Talcahuano 84km away from the epicentre, Arauco 85km away, Coronel 87km away, Lota 88km away and Concepcion 90km away, according to website Volcano Discovery.

On September 1, an earthquake of magnitude 5.8 struck near the coast of northern Chile, the GFZ German Research Centre for Geosciences said.

The quake had a depth of 21km.

The GFZ had initially stated the magnitude at 6.2 and the depth at 10km.