Skip to content
HomeNews‘Brussels will be to blame!’ EU insider warns of ‘chaos’ if Brexit deal collapses 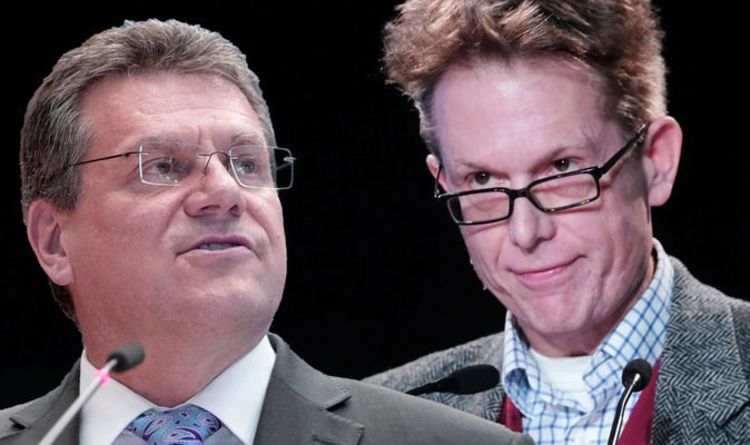 An EU insider urged the European Commission to listen to Britain’s proposals to renegotiate the Brexit deal’s protocol to avoid a hard border carefully. German MEP Gunnar Beck, a member of the EU Parliament’s Brexit committee, said the measures had already threatened the stability of the Good Friday peace agreement. EU and UK officials are currently at loggerheads over how to end the deadlock surrounding the so-called Northern Ireland Protocol.

Brexit minister Lord Frost has threatened to rip up the post-Brexit border fix unless Brussels agrees to renegotiate the agreement.

Responding to the warning, Mr Beck told Express.co.uk: “It is unfair to expect a country to hand over a part of its constitutional territory to come under the legal power of another state such as the EU.

“The NI Protocol allows EU writ on trade to have power in Northern Ireland over the heads of the people that are affected by it. This is completely undemocratic.

“It’ll be the EU’s fault, if because of the NI Protocol, chaos returns to Northern Ireland for failing to talk to Britain. The finely balanced Good Friday Agreement must be respected and the NI Protocol simply trashes that important agreement.”

In a warning shot to the bloc, the Brexit minister said he would not shy away from suspending the Northern Ireland Protocol.

Lord Frost told the House of Lords on Monday night that the EU should take the UK’s proposals to rip up the Brexit deal “seriously” if it wanted to avoid the measures relating to the region collapsing.

Lord Frost and his EU counterpart Maros Sefcovic are expected to announce new rounds of negotiations over the post-Brexit border fix in the coming weeks.

The pair have already agreed to suspend the implementation of EU red tape in Northern Ireland to create space to find a permanent solution to end disruption in the region.

Downing Street has warned that without a wholesale renegotiation of the Brexit treaty, businesses in the area will be hit by shortages because of burdensome EU customs controls.

Whitehall officials have also warned of a return to violence because of Unionist opposition to the measures.

Lord Frost said his Command Paper, published in July, set out the tests the UK would apply to trigger Article 16, which allows either side to suspend the protocol if it is deemed to have a negative effect on everyday life.

He told the House of Lords: “I urge the EU to take this seriously. They would be making a significant mistake if they thought that we were not ready to use article 16 safeguards, if that is our only choice to deal with the situation in front of us. If we are to avoid article 16, there must be a real negotiation between us and the EU.”

MUST READ: France and Germany explode as they lash Frost in Brexit row

Lord Frost signalled that he was frustrated by European Commission vice-president Mr Sefcovic’s insistence he will not accept a renegotiation of the protocol.

The Tory peer added: “A real negotiation does not mean the EU coming up with its own plans for solutions, within the framework of the existing protocol, and presenting them to us as ‘take it or leave it’.

“I was concerned by some of the comments we have heard from Commission representatives in recent days which seem to suggest they may be considering this way forward.”

Meanwhile Mr Sefcovic has told MEPs that he would present a new package of proposals towards the end of the month.

In the private meeting, the top eurocrat said the EU would focus on the issues being faced by individuals and businesses in Northern Ireland.

He vowed to snub the UK’s Command Proposal as a result of his pledge to address problems on the ground in the area.

“If we do have creativity in the UK we can solve the SPS. A Swiss deal would solve it overnight – but this is not good enough for the UK,” Mr Sefcovic said, according to sources.

“We are asking them how they can guarantee that goods going into Northern Ireland from Great Britain will stay there.

“We are looking at what we can do with traceability. Likewise with the customs regimes we are looking at how to reduce barriers. We can find some technical solutions – but I don’t know if they are enough.”

Mr Sefcovic said the EU’s proposals would address the issues surrounding paperwork and checks on meat and dairy products – known as Sanitary and Phytosanitary measures.

He hit out at Lord Frost’s demands, suggesting the Brexit minister’s recent comments may not be sufficient to avoid a crisis in Northern Ireland.

Mr Sefcovic added: “The gap between our sides is significant.

“To create a clam space, we decided not to react to the ministerial statement last week.

“Infringements will not be launched, but we didn’t say this was indefinite.”