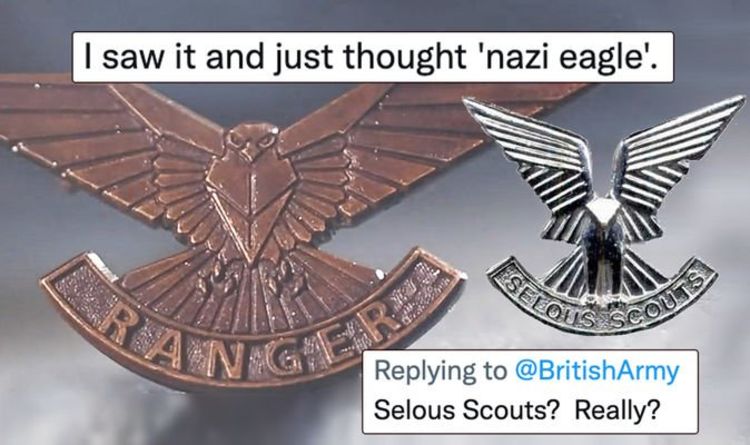 “From 1 December, training for its four battalions will commence. #FutureSoldier #BeTheBest”

Hundreds of concerned Twitter users replied to the announcement, flagging the resemblance to Nazi Eagle, known as the Reichsadler, and the badge of the Selous Scouts, an Apartheid death squad.

“I hope someone has the confidence to admit what mistake that is.”

A second user, @SSN14CO, said: “It would be great if you could share the thought process that landed on this please (apart from the name – that bit is obvious).”

Another, @staff_ex, shared an image of the Selous Scouts badge, writing: “It looks pretty similar to the old Selous Scouts cap badge dontyathink?

They added: “I’m sure there will be no blowback to that at all…”

A fourth user, @Shaftbreak, said that the new badge was proof that the army had “lost the last few shreds of self-awareness”.

READ MORE: The incredible story of a man who survived three Nazi camps

The Selous Scouts was a special forces unit of the Rhodesian Army during apartheid South Africa, which developed a reputation for brutality after committing a number of atrocities against civilians.

The unit fought black insurgent armies and was accused of injuring and killing civilians as they attempted to keep white-minority rule over what became Zimbabwe.

A Defence source told The Telegraph it “seems outrageous” to have a “cap badge in this day and age with any connection to a racist regime whatsoever”.

They said: “An officer said he had seen an email saying that it was actually based on the Selous Scouts.

“It’s almost identical to the Rhodesian Selous Scouts, which is controversial due to their involvement with an apartheid regime.

“There are obvious differences but it’s f***ing close and clearly based on it.”

The Ministry of Defence has rejected claims the new badge was inspired by that worn by the apartheid terror squad, saying while the Ranger Regiment’s badge was designed around a peregrine falcon, the Selous Scouts’ badge depicted an osprey.