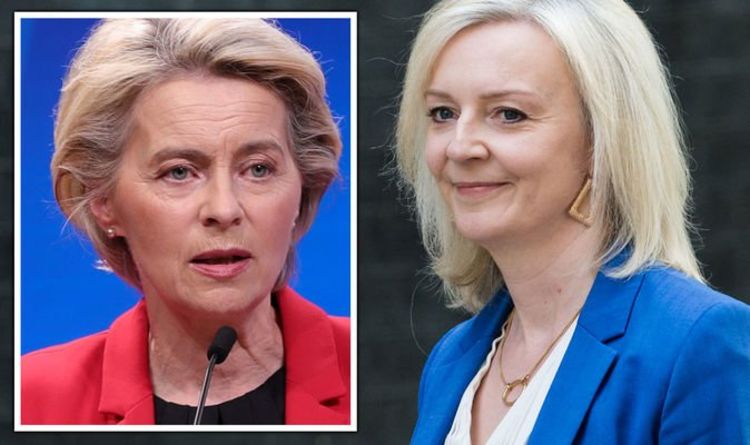 And the International Trade Secretary also took a swipe at Brussels – by contrasting how rapidly trade negotiations between the UK and Australia had gone compared with the European Union’s efforts. Ms Truss outlined her vision for the future in a webinar organised by the Policy Exchange think tank today entitled Britain’s New Trade Policy: Moving from Defence to Offence.

In a question and answer session at the end, she was challenged about the speed of the process of brokering bilateral agreements with countries outside of the EU.

She said: “I’m old enough to remember when people said the UK wouldn’t be able to negotiate any trade deals.

“That we didn’t have the trade negotiation capacity, that we couldn’t get as good deals as the EU.

“And in fact, we succeeded in achieving virtually all of those deals on time.”

Referring to the deal which she signed in Tokyo with Japanese Foreign Minister Toshimitsu Motegi earlier this year, she said: “In the case of Japan, we were able to go further and faster than the EU in areas like digital and data, and mobility.”

In remarks aimed at European Commission President Ursula von der Leyen, Ms Truss said: “We’ve got to agreement in principle, with Australia, that took us under one year.

JUST IN: ‘Obsessed’ Sturgeon is losing touch with her independence dream

She added: “I would say we’re a bit like Goldilocks. We’re doing it just at the right speed to secure the full UK interest, particularly in areas like digital and services that are so important to our economy, whilst remaining nimble, so we are able to access these opportunities as soon as possible.”

Responding to a suggestion that any deal with India, led by Prime Minister Narendra Modi, would in effect be a piecemeal affair consisting of a number of smaller agreements, she said: “Just to be clear, the India deal will be a fully comprehensive deal.

“I had a very good discussion with Priyush Goyal, my counterpart yesterday. He’s very clear and I’m very clear on that.”

In May, the Department for International Trade (DIT) launched a consultation to canvass the views of businesses on a free trade agreement with India.

Britain wants double trade with India by 2030 from its current level of £23bn, with Ms Truss hoping for an interim deal that would cut tariffs on products such as whiskey and cars exports. The European Union’s efforts to reach a deal are currently stalled.

Speaking to Express.co.uk at the time, Nayan Gala, co-founder of venture capitalist firm JPIN VCATS, said: “It’s great to see that the UK and Indian governments are taking this free trade agreement seriously, as India is already a 21st century powerhouse – with further growth inevitable.

“The UK-India trading relationship is already worth almost £24 billion, with 383 Indian companies in the UK employing more than 82,000 people.

“The ETP will help to fuel economic recovery in a post-Brexit, post-Covid UK and really allow the UK to benefit from the immense growth India is about to experience in the coming decade.

He added: “A free trade deal with India could be as high as £50-100 billion and will open the door to 1.3 billion potential customers for UK businesses, and provide opportunities for business improvement, consolidation, foreign expansion and diversification in a rapidly growing market.”