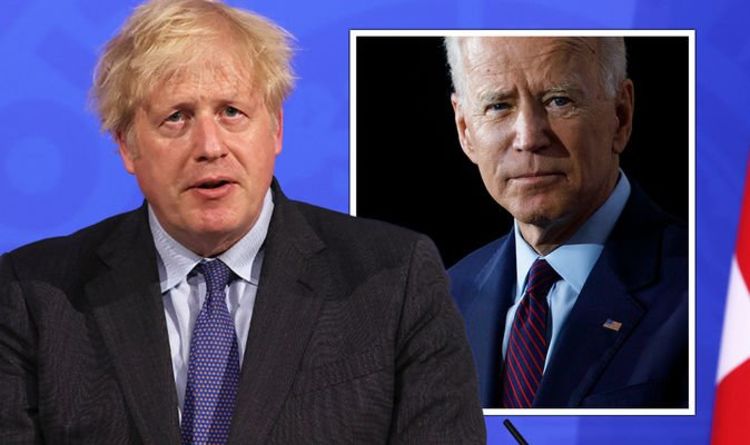 The US President will join his UK counterpart virtually alongisde Australian Prime Minister Scott Morrison at a national security event this evening, the White House said. It is believed that President Joe Biden will use the occasion to unveil a new working group with Britain and Australia to share advanced technologies.

Its creation is seen as a thinly veiled bid to counter China, a White House official and a congressional staffer told POLITICO.

Combined the three countries will be known by the acronym AUUKUS.

It is hoped that the new cooperation will make it easier for the three countries to share information and know-how in key technological areas.

READ MORE: ‘You cannot do it without the UK!’ Brussels’ EU army dreams shattered

A Downing Street spokeswoman said: “At 2200 BST tonight the Prime Minister will make an on-camera address, alongside US President Biden and Australian Prime Minister Morrison, on a strategic national security announcement.”

POLITICO reported that part of the deal could include a nuclear element.

And while China is unlikely to be mentioned explicitly – its increasingly aggressive actions in the region have clearly motivated the three nations to enhance their cooperation.

Ashley Townsend, director of foreign policy and defense programming at the United States Center in Sydney, said: “This is a surprising and extremely welcome sign of the Biden administration’s willingness to empower close allies like Australia through the provision of highly advanced defense technology assistance — something that Washington has rarely been willing to do.”

“It suggests a new and more strategic approach to working collectively with allies on Indo-Pacific defence priorities.”

Australia’s Financial Review newspaper reported Canberra will abandon a $90 billion submarine deal with France and will now acquire an American-made nuclear-powered submarine. The French deal had long been in trouble, with the Naval Group, the French shipbuilder tasked with constructing the 12 submarines, and the Australian government sparring over design changes and cost increases.

A new class of nuclear-powered submarines would give Washington and its allies in the Pacific a powerful new tool to attempt to contain Chinese military expansion, and would follow on the current deployment of a British aircraft carrier to the region, and recent transits by French and German warships to the South China Sea.