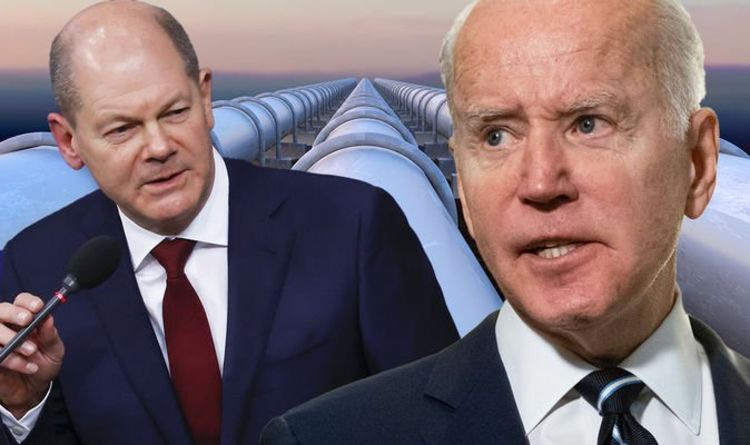 Germany and US are divided over how to deal with Russia’s aggression towards Ukraine, as Germany continues to defend Nord Stream 2, in a move that irks Joe Biden administration.

Last week, a ​ senior official from the Social Democratic Party (SPD) in Germany defended the controversial Nord Stream 2 pipeline, saying that it ​​should not be mixed up with political and human rights disputes with Russia over Ukraine.

Kevin Kühnert, the SPD new secretary-general warned that a potential attack by Russia, while unacceptable, should not be used domestically “to bury projects in this way that have always been a thorn in one’s side.”

This suggests that even if Russia were to invade Ukraine, Germany would be unwilling to impose sanctions on the Nord Stream 2 pipeline.

Germany further reiterated this stance yesterday when Defense Minister Christine Lambrecht said: “We should not drag [Nord Stream 2] into this conflict.

To Mr Biden, these statements pose a headache as he battles Republican senators in the US who are pushing for sanctions on the Nord Stream 2 pipeline.

U.S Deputy Secretary of State Wendy Sherman said that she wanted Germany would take a firmer stance against Russia.

READ MORE: Biden hammered as he ‘takes orders from Germany

She wished that German politicians would say something along the lines of: “From our perspective, it’s very hard to see gas flowing through the pipeline or for it to become operational if Russia renews its aggression on Ukraine.”

Germany has continued to defend the development of the Nord Stream 2 pipeline, with German Chancellor Olaf Scholz describing it as an apolitical project saying: ​​”With regard to Nord Stream 2, it is a private-sector project,”

Germany has been criticised for its heavy dependence on imported Russian fossil fuels, which some analysts believe is used by Russian President Vladimir Putin to influence the country’s decisions when dealing with Ukraine.

The Nord Stream 2 is a Russian pipeline currently in the works and has Germany and the Kremlin locked in negotiations.

If Germany greenlit the €10-billion (£8.4 billion) pipeline, it would deliver double the amount of gas from Russia, up to 110 billion cubic metres (BCM).

Germany and Brussels still need to supply final certification before it can operate, and the recent controversy has made its future uncertain.

Nord Stream 2 is opposed by Washington and especially several east European states, which say the pipeline will make the EU even more reliant on Russian gas, which already supplies 35 percent of the bloc’s gas needs.