Bennett will speak about Israel’s national security and regional issues, according to his office. His remarks will likely focus on Iran’s nuclear program and its support for armed proxy groups.

The trip will be Bennett’s second official visit to the United States as prime minister. On August 27, Bennett met with US President Joe Biden at the White House, during which both sides sought to exude an atmosphere of warmth and cooperation.

Bennett’s predecessor, Benjamin Netanyahu, was known for making headlines with his speeches on the Iranian nuclear threat at the UN General Assembly, often using cardboard graphics and other props to get his point across.

The two-week-long event kicks off on Tuesday, and will be markedly different than last year’s event, which was conducted mostly online due to the COVID-19 pandemic.

Bennett will be one of at least 83 world leaders who plan on attending in person, according to Turkish diplomat Volkan Bozkir, president of last year’s gathering. 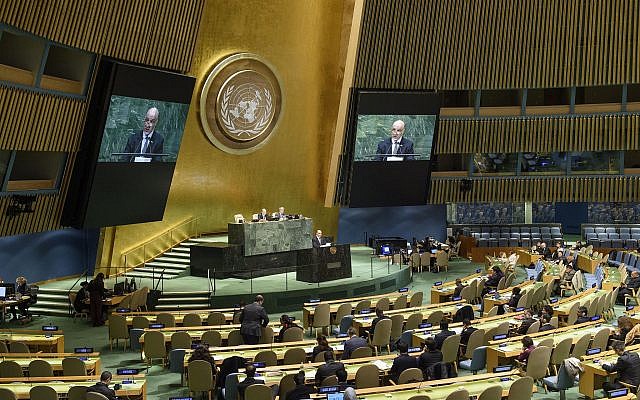 The General Debate, at which world leaders and other top officials will speak, begins on September 21.

According to a provisional list of speakers, Biden will speak on the morning of September 21, in America’s traditional slot as the second speaker of the General Debate.

Israel’s regional partners will also be represented, according to the provisional list. Egypt and Jordan will send their heads of state, while the foreign ministers of Israel’s new Gulf alliesm Bahrain and the United Arab Emirates, will speak.

New Iranian president Ebrahim Raisi sent a prerecorded address to be broadcast at the event. 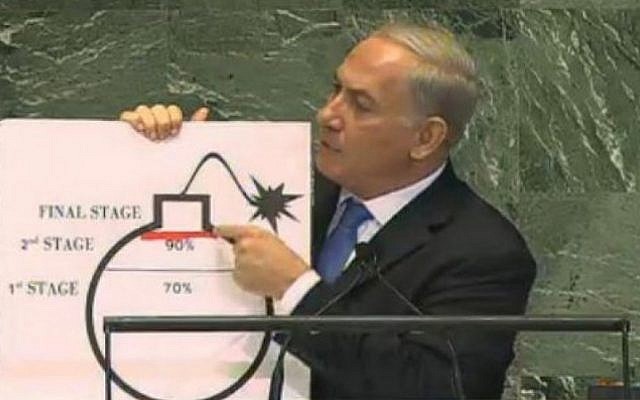 Prime Minister Benjamin Netanyahu sets out his ‘red line’ for Iran on a cartoon bomb drawing during a September 27, 2012 speech to the UN General Assembly. (Avi Ohayun/GPO)

The UN is trying to limit the number of attendees at the event to prevent the spread of COVID-19. Countries will be allowed to bring only four people in addition to the speaker.

The UN is mandating that its own staff be vaccinated in order to attend, but not foreign diplomats.

On August 16, the US mission to the UN sent a letter to member states calling for all General Assembly events, including the General Debate, to be virtual.

The meeting marking the 20th anniversary of the Durban World Conference on Racism — also known as Durban IV — will take place on September 22. Israel, the US, Britain, Canada, and other Western counties are boycotting the event over concerns that it will veer into open antisemitism as previous Durban conferences did.