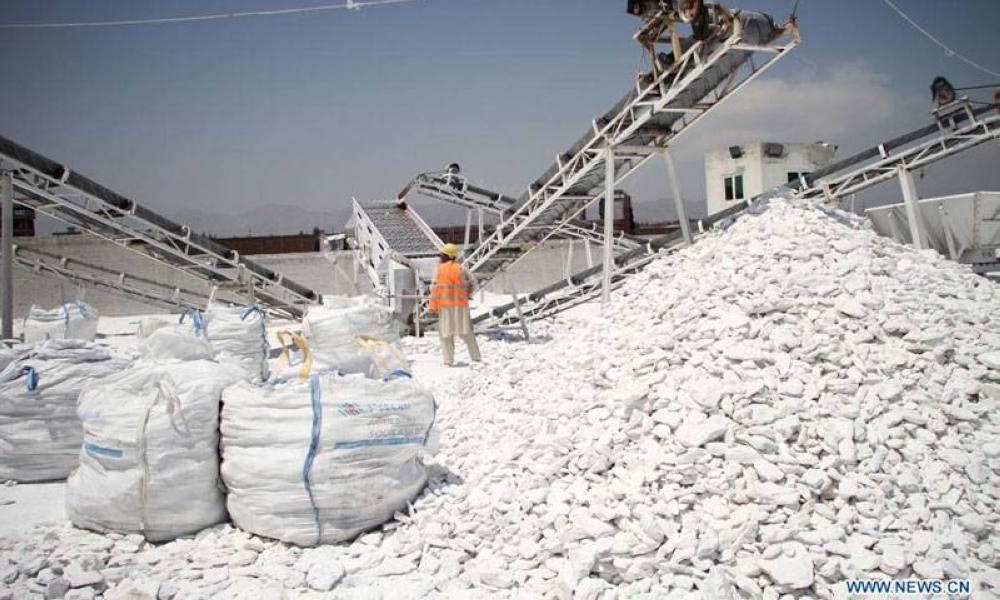 A man works at a talc stone processing factory in Sorkh Road district of Nangarhar province, Afghanistan, on May 9, 2021. XINHUA PHOTO

KANDAHAR: Representatives of several Chinese companies have arrived in Afghanistan on special visas and are conducting on-site inspections of potential lithium projects, estimated to be worth around $20 trillion, while others have made contacts about such projects, several Chinese businessmen in Afghanistan told the Global Times, marking a concrete initial step in potential cooperation in developing one of Afghanistan’s biggest mineral deposits.

However, despite growing interest from companies, major hurdles and risks remain for Chinese firms to actually implement such projects, given the major uncertainties in the country in terms of policy, security, the economy and infrastructure, some mining industry insiders who have been involved in overseas projects, including in Afghanistan, told the Global Times.

After coordination between the China Arab Economic and the Trade Promotion Committee in Kabul and Afghanistan’s mining ministry, representatives of five Chinese companies obtained special visas and arrived in Afghanistan early in November to conduct on-site inspections, Yu Minghui, director the committee, which has been helping Chinese companies explore business opportunities in Afghanistan, told the Global Times on Tuesday.

“[They] have arrived in the Chinatown and are conducting inspections in Afghanistan as planned,” Yu said, adding he believes these company representatives received the first batch of special visas issued to Chinese investors.

With the power transition in Afghanistan, such arrangements are hard to make and they require coordination among various companies and authorities, he said.

Yu said he had spoken with the representatives of the Chinese companies and they were most concerned about basic guarantees of security and social order in Afghanistan while some praised the Afghan Taliban’s friendliness toward Chinese investors.

“Some believe friendly relations between China and Afghanistan… are conducive to Chinese companies’ operations,” Yu said.

During meetings and official statements, Taliban officials expressed a welcoming attitude toward Chinese companies as they seek to rebuild the war-torn country.

Amid the friendly ties, interest in Afghanistan’s mining sector is also growing among Chinese firms, including projects involving copper and lithium, given the massive deposits estimated to be worth as much as $1 trillion.

In terms of lithium, a critical but scarce resource for batteries and other technologies, Afghanistan could rival Bolivia, which currently has the world’s biggest known reserves, according to a CNN report.

Apart from the five Chinese companies whose representatives are currently in Afghanistan, at least 20 Chinese state-owned and private companies have also made inquiries about lithium projects, Gao Susu, a staffer at the China Arab Economic and Trade Promotion Committee, told the Global Times on Tuesday.

However, despite the growing interest and on-site inspections, major hurdles and risks remain for any potential project and many companies will likely adopt a wait-and-see attitude until conditions improve, industry insiders noted.