Two residential apartment buildings in Bnei Brak were evacuated late Thursday night amid fears that the structures were in danger of collapse.

Fire and Rescue Services personnel evacuated nine families from the two buildings in the central Israel city. They were first called to the scene after cracks in the walls were reported in one of the buildings. A city engineer who was called to the scene checked an adjacent building and ordered its evacuation as well.

According to Fire and Rescue Services, a call came in late Thursday, after the end of Yom Kippur, warning of a building “that appears on the edge of collapse on Bar-Ilan Street in the city.”

After Bnei Brak firefighters arrived on the scene and “discovered deep cracks in the building,” they ordered its evacuation, as well as summoned an engineer to the site, said the Fire and Rescue Services in a statement.

The engineer ruled that not only was the building in danger of collapse, but a second neighboring building was also in danger and was ordered evacuated as well. Fire officials disconnected the two buildings from electricity and removed any gas receptacles that were inside.

The residents of the two buildings were placed in a local hotel until more permanent solutions can be found. 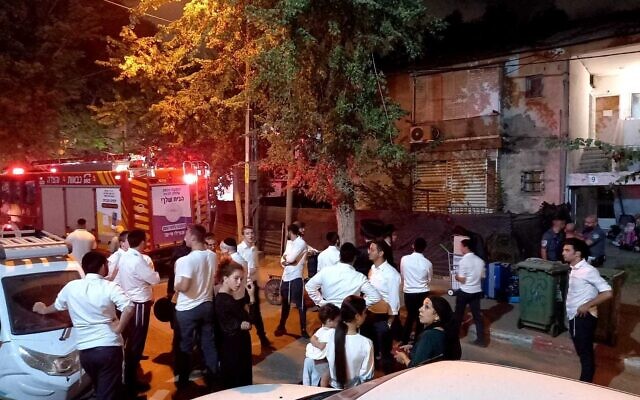 A Bnei Brak building is evacuated on September 16, 2021 after cracks appear on the walls (Fire and Rescue Service)

The evacuations come less than a week after a residential apartment building in Holon collapsed a day after it was ordered to be evacuated by a fire official.

Thirty-six families in the building in Holon were ordered to immediately leave on Saturday, after residents reported hearing cracking sounds and some were unable to open their front doors.

The building gave way on its own just a day later, reflecting how close the situation had been to becoming a mass-casualty disaster resembling the collapse in June of a high-rise residential building in Florida, which killed 98 people.

Since the Holon collapse, concerns over repeat incidents have led to multiple evacuations of old and crumbling buildings across the country, including in Kiryat Shemona.