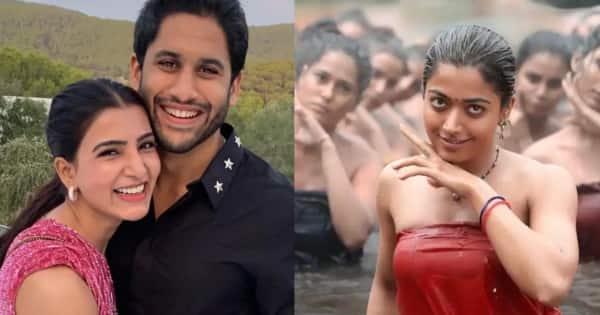 Saturdays are always about relaxing and taking a rundown of everything that happened over the week. We are here to tell you about all the top stories and gossips from the South Film industry. Naga Chaitanya who got divorced from Samantha Ruth Prabhu a few years ago finally opened up about the same. Pushpa actress Rashmika Mandanna made it to the news as reportedly she has hiked her fees post the success of the film. Stars like Keerthy Suresh, Allu Arjun and other also became the newsmakers of the week. Read on. Also Read – Mother India, Sholay, K3G, Sooryavanshi and 60 more big hit Bollywood multi-starrers featuring 3 or more big stars – view pics

In a recent meeting with the press, Naga Chaitanya opened up about his divorce with Samantha Ruth Prabhu. He was quoted saying, “My entire family stood by me during those difficult times. It was a decision taken in the best interests of the two of us. She’s happy. I’m also happy. Both of us are doing well professionally too.” Also Read – Pushpa, Akhanda, Vakeel Saab, Jathi Ratnalu – check out the ten HIGHEST GROSSING Telugu movies of 2021 at the box office

Reportedly, after the success of Pushpa: The Rise, Rashmika Mandanna has hiked her fees. She had reportedly charged Rs 2 crore for the film and for the next instalment, the actress has reportedly asked for Rs 3 crore. That’s a hike of 50 per cent.

Keerthy Suresh took to her social media accounts to reveal to her fans that she has tested positive for Coronavirus. She penned that she is in isolation and is recuperating.

Everybody is obsessed with Allu Arjun’s Pushpa: The Rise. Recently, cricketer Ravindra Jadega recreated his look and shared it on Instagram. The actor even responded to it and commented “Thaggede Le”. It is a popular line from the film.