Skip to content
HomeEntertainmentSatyameva Jayate 2 short movie review: John Abraham and Divya Khosla Kumar starrer is ear-splitting loud and bombards you with every cliche in the book 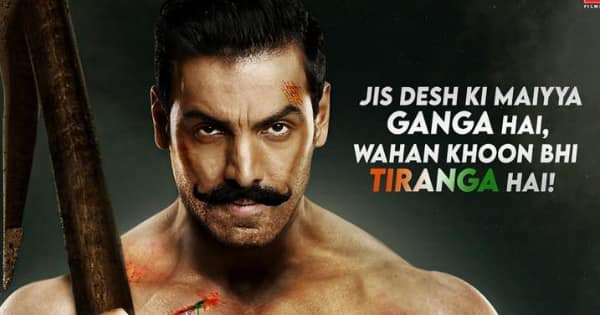 Positives: Some of the action scenes click and to Director Milap Zaveri’s credit, he does manage to string in recently tumultuous incidents that shook the nation like doctors’ strikes, several kids dying in a hospital due to food poisoning, followed by lack of oxygen cylinders in, flyovers collapsing, or the patriotism of Muslims being questioned. Plus, John Abraham‘s swag in his Jay avatar is to die for. The twist at the interval is also something you don’t see coming. Also Read – Kaun Banega Crorepati 13: John Abraham breaks down in front of Amitabh Bachchan; leaves Satyameva Jayate 2 co-star Divya Khosla Kumar emotional

Negatives: With the first Satyameva Jayate, Milap Zaveri had crafted a very enjoyable, throwback masala flick, that took us on a pleasant nostalgic ride of the 70s and 80s. He followed that with an extra oily omelette known as Marjaavaan, that took us on a different kind of nostalgic ride, of the overdone masala variety from yesteryears – the ones not made by names like Manmohan Desai, Nasir Hussain or Prakash Mehra. That movie managed to moderately click for some reason at the box office (I always believe the audience is king and their verdict is non-debatable, but even I couldn’t fathom this one), giving Sidharth Malhotra a much-needed hit in the bargain, and giving Milap further impetus to go from said extra oily omelette to totally burned omelette, which he has done with Satyameva Jayate 2. Also Read – From Janhvi Kapoor to Malaika Arora: Bollywood hotties light up fireworks in hot pink outfits

It’s eardrum-splitting loud; the dialogues are written in such preposterous poetic manner that Gunda’s lines suddenly seem straight out of Shakespeare; the emotions and screenplay are so melodramatic that you’ll be compelled to bellow your guts with laughter or risk questioning the morality of your life choices; religious cliches are amplified to the hilt in a feeble endeavour to please everyone; and nationalism is played to such hyper effect that you’d think of jovially think of exiting the theatre and rushing to hoist the next flag if the reality of the times we’re living in were not so disturbing, where people’s identity is being questioned left, right and centre. Also Read – Worst Dressed celebs of the week: Nora Fatehi, Urvashi Rautela, Kajol’s fashion choices are SHOCKINGLY bad

Satyameva Jayate 2 gives masala movies a bad name and dilutes all the good efforts by filmmakers like Rohit Shetty or Sajid Khan or even Milap Zaveri’s very own Satyameva Jayate part 1, providing Bollywood bashers with more fodder to bash Hindi cinema’s most traditional and homegrown approach of filmmaking. To make matters worse, Divya Khosla Kumar‘s performance is so abjectly bad that you wonder if she recited her dialogues on battery mode.