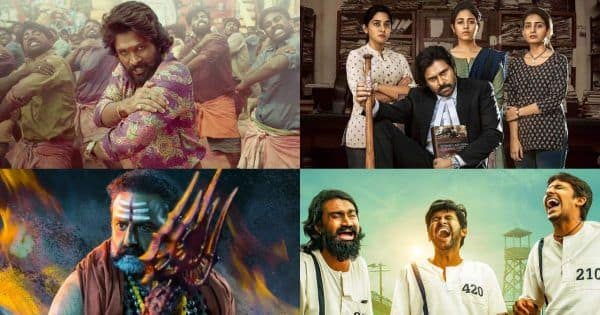 Pushpa: The Rise has stormed the box office worldwide to end up as a bonafide superhit in all territories both domestic and overseas. And when we say all territories, it’s because the movie has finally achieved the ‘superhit’ tag in the Hindi belt, too, come its fourth week, where it’s still doing rollicking business. Pushpa, starring Allu Arjun, Rashmika Mandanna and Fahadh Faasil, and directed by Sukumar, with music by Devi Sri Prasad, hit the big screen on 17th December 2021, and has grossed Rs. 343 crore worldwide now that it’s nearing the end of its run. Also Read – Pushpa star Allu Arjun owns a sprawling bungalow estimated to be worth Rs 100 crores – view pics

What’s more, Pushpa’s gargantuan box office collection has perched it atop the list of highest grossers worldwide for last year, going past Thalapathy Vijay‘s Master and Akshay Kumar‘s Sooryavanshi in that order. On that note, let’s check out the top ten highest grossing Telugu movies of 2021 below, which include other huge hits like Pawan Kalyan’s Vakeel Saab, Nandamuri Balakrishna’s Akhanda, Uppena and Naveen Polishetty’s Jathi Ratnalu, along with their box office collections and verdicts: Also Read – Akshay Kumar REFUTES rumours of travelling to Lucknow; says, ‘Absolutely untrue’

What makes Pushpa’s humongous worldwide gross even more impressive is that it’s only the seventh instance that a South movie (Tamil or Telugu, as no Kannada or Malayalam movie has hitherto accomplished the feat) has ended up as the highest grossing Indian movie worldwide for a calendar year. Here’s the entire list of South films that have beaten Bollywood to achieve the feat in their respective year along with their box office numbers…

Definitely, a stupendous year for Tollywood in general.