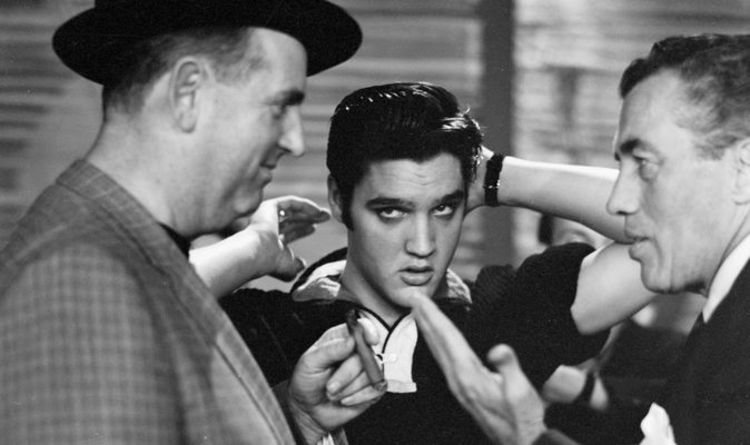 By 1956 Elvis Presley was quickly becoming a phenomenon across the USA. On October 28, 1956, the Mississippi born star appeared on TV for the second time on The Ed Sullivan Show. By this time, the two had become good friends.

During his second arrival on the show Elvis performed his hit song Love Me (not to be confused with Love Me Tender) alongside a barbershop quartet known as the Jordanaires.

He introduced the song: “Friends, we’d like to do a number for you from our new album. It was released by RCA Victor this week.

“With the help of the Jordanaires, we’d like to do one [a song] called Love Me.”

The King of Rock and Roll couldn’t resist tilting his head up to Ed Sullivan and making a cheeky comment about the track he was going to sing.

Elvis finished the introduction by smirking: “It’s a new one, Ed!” The 21-year-old’s comments referred to the music he performed on The Ed Sullivan Show a month earlier. Other than Love Me, Elvis played the same tracks during his second appearance on October 28 as he did during his first performance on September 9, 1956. He played both Hound Dog and Don’t Be Cruel during each of the TV performances.

So, to avoid this from affecting Ed Sullivan’s viewers, the King of Rock and Roll was filmed strictly from the waist up.

The star’s performance was well-loved by viewers and his fans alike, but he did receive some criticism.

A critic from Time Magazine pointed out how Elvis was not loved by every viewer.

The critic wrote: “When it was over, parents and critics, as usual, did a lot of futile grumbling at the vulgarity of this strange phenomenon that must somehow be reckoned with.”

He called Elvis “a real decent, fine boy. We’ve never had a pleasanter experience on our show with a big name than we’ve had with you”.